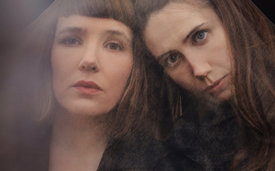 There is a great succession of musical discoveries coming out of Sweden right now, and it never ceases to amaze. In this instance, the well-honed skills of jazz musicians are aligned with an strong sensitivity for songwriting. The three women and two men who make up "Dearest Sister" form a band in the fullest sense. Their upcoming debut album "Collective Heart" (Release: November 11, 2022) is a prime example of a current musical development: extremely able young musicians with open minds and ears are applying the rigour and the tools from their jazz training to find a sound world that is very distinct from jazz. And whereas their music unavoidably looks straight in the eye at the influences, themes and issues affecting their generation, these artists also deftly avoid another trap: they steer clear of the usual production methods of mainstream pop in favor of a much more destinct,  grounded approach. What we find on this album is what many listeners are longing to hear: authenticity, originality and emotional depth.

The core of Dearest Sister is a very special creative duo: singer/keyboardist Andrea Hatanmaa and pianist Ylva Almcrantz. The two met while studying jazz and popular music at the Malmö Academy of Music in Sweden, the city where the band is based. They have contrasting personalities and come from very different musical backgrounds. A creative tension arises from that, and it not only infuses Dearest Sister's music, it is also what makes it so appealing and interesting. Andrea Hatanmaa was brought up in Finland. Raised on rock and pop music, her vocal technique is rock-solid, and yet she doesn't sound anything like a typical jazz singer. She says: "What is important to me is to master my craft, and to learn and assimilate as much as possible from all directions,  and then – whether I’m on stage or in the studio –  to forget all that and find an individual voice and personal expression."

It is not only Hatanmaa’s haunting voice with its kaleidoscope of facets and nuances that shapes the music, but also the lyrics and concise, refined songwriting. Hatanmaa and Ylva Almcrantz form a songwriting partnership. The singer says: "Ylva is the musical genius in the band. She comes up with the most beautiful arrangements and has an amazing sixth sense for moods, sounds, dynamics, small and big melodies," adding with a laugh: "I just have to be careful that it doesn't all get too jazzy."

The band's name, Dearest Sister, brings into focus the special bond between the two women. It is borrowed from "Allrakäraste Syster" by Swedish children’s author Astrid Lindgren, a story about two sisters who experience magical adventures in a secret land.