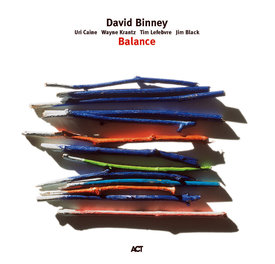 "A discovery of the first magnitude" is how France’s Jazzman magazine described David Binney’s ACT debut in 2001. The CD has been praised by no less than the prestigious British newspaper The Guardian, and the publication that many jazz fans still consider the Number One authority in the field, the American jazz magazine Downbeat, has awarded the CD an impressive four stars. In so doing, they praised the group’s unity "their closeness and precision illustrate a oneness that can only be achieved through the moste sesitive, sympathetic listening". Concerning the debut CD "South" (ACT 9279), the opinion of the jazz press was unanimous: 40-year old saxophonist Binney, a native Californian now living in New York, had forged an enthralling musical combination of highly demanding compositions and the most possible freedom for such skilled soloists as saxophonist Chris Potter and pianist Uri Caine. The music shimmered, with subtly interwoven colors and textures revealing the bandleader’s special feel for elegant lines and polished sense of drama.

"Balance", Binney’s new CD, is on the same high level, or maybe even a notch or two higher up the rung - and for those who know the first album, this one is full of new surprises. It’s a very different much more "funky" sound that Binney’s band digs into. Drummer Jim Black and pianist Uri Caine are back, but with the addition of Wayne Krantz and Tim Lefebvre, new textures are brought into the mix - guitar and bass (electric instead of accoustic) - along with a line-up of guests that include singer Tanya Henri. Binney wrote in a commentary on the pieces that as he was composing the music for this CD he was hearing an "electric" sound in his inner ear. During this time he had dug up the music that had influenced him as a youngster: George Duke, Stanley Clarke, Jan Hammer, Wayne Shorter, Weather Report, Lenny White, Tony Williams, Herbie Hanncock, and others.

David Binney praises these influences for their "openness and diversity", and resolves these ideals into a consistent "balance". Binney shows that this balance can change, continually transformed by the prevailing modes. During his steady gig at New York’s "55 Bar" Binney sometimes radically altered his music from one week to the next - one time it would be highly arranged and "acoustic", the next, freer and "highly electrified". Such are the metamorphoses with their ever-changing characteristics that are conjured up on this new CD. There are tender, flowing instrumental ballads ("Marvin Gaye", "We Always Cried"), and funky, ripping pieces with angular bass underpinnings, perfect backgrounds for intense improvisations ("Arlmyn Trangent"). There are beautiful-weighty unaccompanied horn parts ("Midnight Sevilla"), wildly spiralling saxophones and shrill, screaming guitars practising the high art of going crazy ("Speedy’s 9 is 10"), and, last but not least, trance-like messages sung over a feverish, turbulent accompaniment ("I’ll Finally Answer"). From supercharged solos to full, rich grooves, from electrifying contemporary free jazz to lyrical pearls - as if obeying some inner law, the many diverse elements in "Balance" coalesce into a homogeneous whole. What some reviewers had already discovered in "South" - that you can be carried from one mood to another without some act of musical violence - is also true for Binney’s new CD.

David Binney proves to be not only a gripping musical adventurer, an inspired investigator of previously hidden worlds of sound - he also shows himself to be a superb composer: the CD can be heard as a composition filled with many exciting discoveries within the 12 sections. At the least, "Balance" should continue on the path "South’s" success.