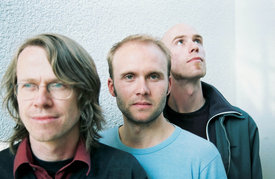 A "simple, effective melody" must sound as though "you’ve always known it" as Ralph Siegel, the composer of easy listening "Schlager" music once in an interview.

For four decades this hit composer has followed his dictum with successful consequences. The "craftsman of emotions" - as the German newspaper "taz" described him - has been recorded as composer or producer of over 3000 "Schlager" pieces, and has been the writer of the German entry for the Eurovision Song Contest 16 times. In fact, in 1982 his Song "Ein bisschen Frieden" was the winner.

Compared with the cosmos of jazz – where ideally melodies are played so that they are no longer recognisable - the shimmering dream world of Schlager music seems light years away.

But now we have a clearly serious homage by three top German jazz musicians to the master of glamorous simplicity, Ralph Siegel.

It is possible to hear a totally new and inspirational trio on this album. Carsten Daerr is one of the great piano discoveries of recent years; Henning Sieverts has made his name as a bandleader and composer, as well as an in-demand sideman for many national and international musicians; and Bastian Jütte is known for his totally apt and sensitive rhythms added to many bands on the current scene.

Producer and ACT label boss Siegfried Loch was looking for a special present for the sixtieth birthday of his friend Ralph Siegel. He booked Sieverts, Daerr and Jütte. They then chose the most appropriate pieces from the dozens of Siegel hits, and all went into the studio and settled down to the creative work in hand.

For example the Udo Jürgens hit "Griechischer Wein", produced rather than composed by Siegel, is given a different jazz face. Many Broadway hits have become standards through their jazz interpretations and have entered the Great American Songbook for eternity. Whether some of these Siegel pieces will similarly become German jazz standards remains to be seen. However, the result of these trio recordings proves to be an experiment worth repeating.

Siegel is cult. That’s certainly true in the particular world of the Eurovision Song Contest. Daerr, Sieverts and Jütte respect this by performing immensely inspiring versions at the highest level. Henning Sieverts describes it as follows: "Melodies such as ‘Dschingis Khan’ and ‘Ein bisschen Frieden’, simple as they are, are just as appropriate for jazz versions as many Broadway melodies."

Ralph Siegel, himself a Gershwin admirer, would be flattered by Sievert’s words - and their artistic reworkings which give the pieces a subtle new lease of life will provide pleasure for many fans of contemporary jazz.