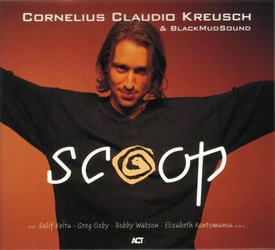 "Jazz is tenderness and mighty force". Cornelius Claudio Kreusch found the theme of his career in Gertrude Stein‘s writings. Kreusch‘s second home is New York. "For me the noise of New York is the most beautiful sound tapestry, the dirt on the streets is patina." says the 29 year old Munich born pianist. His band is called BlackMudSound - and BlackMud, that is the primeeval mud of the river Nile, the boiling mixture of funk, jazz and Africa in New York‘s maze of cultures. "It is the sound of dancing feet, clapping hands and singing voices. BlackMudSound is of all colours and becomes one with all - people!" Kreusch writes on the cover of "SCOOP".

You need more than just talent to succeed in the capital of jazz, to hear the manager of New York‘s legendary jazz venue "Sweet Basil" say: "Cornelius is a phenomenon on it‘s own." Kreusch does not plan his projects elaborately, does not pay good money for arbitrary all-star-ensembles. He approaches musicians impulsively. Will Calhoun, drummer of the rock band Living Colour, he met at Tower Records. "I didn‘t even know him, but I realized from the signature on his jacket that he had to be a drummer. I adressed him  and gave him my CD." Calhoun listened and joined the BlackmudSound: "You sound great. Let‘s play".

Cornelius Claudio Kreusch‘s love for music started when he rested beneath mother‘s grand piano as a kid.  When Cornelius was five he got his first piano lessons by his mother, classical pianist Dorothée Kreusch-Jacob. At the age of 10 he was confronted with jazz for the first time. What followed were studies in classical piano with Prof. Claude-France Journé and Mordecai Shehori (pupil of Horowitz) and studies at both the elité jazz schools: Berklee College of Music in Boston (Bachelor of Music) and Manhattan School of Music (Master of Music).

"SCOOP" (ACT 9255-2), Cornelius Claudio Kreuschs debut for ACT, is the third CD he recorded in New York, the fifth in his discography. Since the pianist lives in New York his style has changed: It became very obvious, that among the instruments Kreusch once learned to play used to be a drum set. Short and many-layered solos, precises themes and a constant beat dominate the songs.

"SCOOP" is coined by the multitude of different musicians. Kreusch met Salif Keita, the great singer from Mali, in Paris. "The contact came through my bass player Zaf Zapha. Working together was a highlight and a present for both of us, a strong emotional moment." Together Kreusch and Keita wrote he explosive "Salif". "Yarum" is a piano sounding like a drum plus Thomas Grimes poetry, the nervous "Pulse" comes from Cyril Atef‘s percussion and Greg Osby‘s saxophone and the funky "Faith" introduces the great jazz voice of Elisabeth Kontomanou. The ballad "Feel!" stands in the great tradition of the piano trio, "Nomad" again is much further on: Mighty and conjuring. ""SCOOP" is the first record which tells all about my stilistical bandwidth and my will to find a language linking all cultures."

Kreusch is being haled as one of the most important discoveries in jazz worldwide. With "SCOOP", his afro-Jazz-creations and the impressive list of eminent friends and guests Kreusch shows more: An important young pianist has found his music - tender, mighty and deep in the BlackMudSound.

"You will rise and rejoice
As you get down deep
to the roots of the rhythm
.......Here’s The Scoop!"