Christof Lauer
Shadows In The Rain 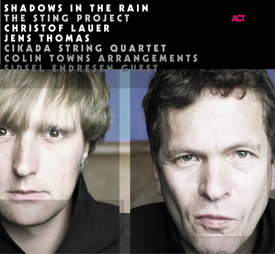 Shadows In The Rain

Already by the beginning of 1999 Jens Thomas was Christof Lauer’s top choice as playing partner. By then Lauer was popping up at private events  with Thomas in tow, and soon Thomas was playing concerts with Lauer. Lauer can congratulate himself a bit at having discovered Jens, since Thomas was at that time not a well-known figure in the scene, although he had founded his group "Tricolor" some ten years before. With Thomas’s CD "You Can’t Keep a Good Cowboy Down" (ACT 9273-2) came success the likes of which no other German jazz musician before him had experienced. The Goethe Institute took him to heart, radio productions and festival appearances piled up, and in a span of less than two years, Thomas had won virtually all the prizes that the German music scene and cultural institutions had to give out. The reasons lay in the individuality of a musician who had come to jazz at an unusually late age, and didn’t care about cultivating the same old standards, or celebrating absolute freedom. Rather, from his background in classic and rock, and his later fascination with improvisation, he was able to develop completely new forms, which in their originality is scarcely comparable to the wider front of up and coming young American pianists.

Christof Lauer’s and Jens Thomas’s friendship would be sealed with a project that, like the Thomas production of themes from Ennio Morricone, would be structured with chamber-music-like finesse, and would be without bass or drums. It would also be an hommage to another musician: Sting. The "good guy" among the Superstars, whose group, Police, had so impressed Jens Thomas before he had had much to do with jazz, now gets back (in the sense that jazz musicians are playing his themes) some of what he gave to the music in the late 1980’s. It was in that period that he opened up his group The Blue Turtles to the prominent American jazz musicians Branford Marsalis, Kenny Kirkland, and Omar Hakim. That Police guitarist Andy Summers completely left rock to pursue jazz is further evidence of the mysterious compatibility of Sting’s musical sphere with jazz. With elegant precision, Lauer and Thomas transport the themes from Sting into a space of free fantasy, preserving the basic atmospheric feeling of the often melancholy, often brilliantly raging originals. But their idea was to use the material for endless transformations, interpretations, and interaction that ranges from the lyrical to the turbulent. New harmonic interpretations and a grandiose kaleidoscope of colors are brought into play so that the sonorities of Lauer’s tenor and soprano saxophones sound pale and otherworldly, and the high tones are given a surrealistic brilliance. So it is with the soprano saxophone part from the title piece "Shadows In The Rain", on through to the cryptic, fanciful, ghostly voice of Sidsel Endresen.

The Cikada String Quartet joins in on four compositions. Lauer’s favorite writer and conductor, Colin Towns, wrote the arrangements for these pieces. In the last years the Englander has ascended to become a busy internationally acclaimed big band maestro. Here he has written for a string quartet for the first time - with almost magical results; but he is certainly not the only underpinning creative force. There is the engaged, impressive play of the Cikada Quartet, which is to the point and devoid of pirouetting histrionics. That and the wonderful immediacy of Jan Erik Kongshaug’s recording technique help transport the music to a new level of integration in the otherwise difficult partnership between the sounds of classic strings and jazz.