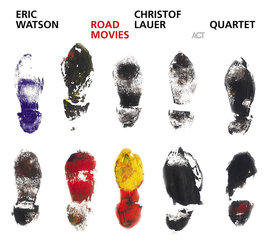 Power. Let’s get straight to the point. The great fascination of this group led by pianist Eric Watson and saxophonist Christof Lauer is the enormous power which the quartet knows well how to harness.

Everything else that we can expect from these gentlemen follows on naturally. In Lauer’s case, it’s the overflowing imagination, fired by a stupendous technical virtuosity through which every idea is realisable and which is able to consider the feasible potential of any idea from all directions: not just the various musical structures from bebop patterns to Coltrane’s "sheets of sound", but also the heart-melting ballads, the wonderful kaleidoscope of tones from deep sonorities to imperious overtones. It’s the free collective spirit that gives enough space for subliminal encounters and intelligently disguised references to themes.

American Eric Watson, who has been living in Paris since 1978, is a musician with global dimensions. Already during his studies he balanced his interests in classical and jazz; even though jazz has now taken prime position, he is still considered the ideal interpreter of the piano music of Charles Ives. As a jazz musician he has travelled the world,  with Steve Lacy, Ed Thigpen, Paul Motian, Albert Mangelsdorff, and innumerable others. A musician able to cross boundaries like no other in every context, his wide-ranging experiences light a vital will o’ the wisp. Angular Monk-like remembrances mix easily with the modern contemporary sounds of the 20th century, spiky thundering free jazz extensions, abstractions from the school of Lennie Tristano with the drive of a Buddy Rich.

Eric Watson and Christof Lauer have met regularly for radio recordings with the Hessischer Rundfunk Jazz Ensemble and have been good friends for a very long time. What they bring to this quartet with the young French rhythm section of Christophe Marguet and Claude Tchamitchian (who have collaborated with many including Henri Texier, Kenny Wheeler, Bud Shank, Daunik Lazro, Joe McPhee and Raymond Boni. .) is not what might be initially expected - or at least a particular aspect: the joy of playing together, the rhythmic nuances, the understanding of the body-swaying 4-4 swing, the rhythmic forces, which raise the roof, and the hot challenging accompaniment of Watson’s piano which launches Lauer into the stratosphere - a music ripe with a power which brings it into a class of its own.