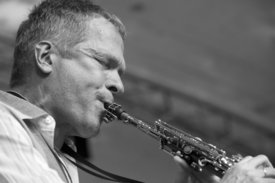 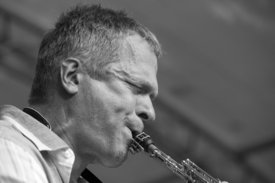 Only very few of today's jazz musicians and fans still know who Sidney Bechet is: one of the founding fathers of jazz. He played the soprano saxophone like no other, and with his French-Creole-inspired compositions, he was a forerunner of jazz's openness to all musical styles.

More than ten years ago, ACT owner Siggi Loch, whose passion for jazz was aroused by a Bechet concert that he attended at the age of 15, asked Christof Lauer whether he could imagine doing a project that focused on this jazz pioneer. What Loch was hoping for was an entirely new way of looking at the genius of this New Orleans native, born in 1897, interpreted by someone from a free-jazz background who had developed his unmistakable sound playing with Albert Ayler and Stan Getz, collaborating with the Frankfurt School of Albert Mangelsdorff and Heinz Sauer, and working with American jazz musicians and the French avant-garde around Michel Godard and Marc Ducret.

But as Lauer recalls, he – the "best saxophonist we have in Europe" according to Volker Kriegel – was "in a totally different place at the time". But the seed was sown, and it germinated slowly but surely, as is not entirely atypical for Lauer: For example, he didn't bring out his debut album, chastely bearing only his name as a title, until 1990, at the tender age of 37, which, however, promptly won the annual German Record Critics' Award, a feat that he repeated nine years later with his ACT debut "Fragile Network". Lauer also says that he didn't have much to do with Bigband music either, until 1993, when he finally succumbed, after several requests, and joined the NDR Bigband, which he is still a member of to this day. The band director at the time, Dieter Glawischnig, who had been Lauer's teacher in Graz in the 70s, convinced him with arguments such as that the orchestra was transforming into a soloist band.

In a similar way, the collaboration had also become more intense with Rainer Tempel in recent times, one of Germany's leading bigband arrangers and composers, who also works for the NDR Bigband. It was with him that Lauer revisited the subject of Sidney Bechet, "and I found myself relating to Siggi Loch's idea as a bigband thing, because Rainer knows how I play and how you can realize a project like that. And because he always totally engrosses himself in every venture he commits to."

And that is something that cannot be overheard on the album "Petite Fleur", which they recorded in four days in the studio. Unmistakable Bechet classics appear in an entirely new light thanks to Lauer's distinctive tone and the multilayered arrangements. It all begins with the soprano saxophone, because even though most know Lauer as a tenor saxophonist: "I played an incredible amount of soprano in the HR Jazz Ensemble, and occupied myself with it intensively," he says. Sidney Bechet's typical vibrato is replaced by Lauer's intense and expressive sound, which can draw long lines just as readily as swirling garlands. "It wouldn't make any sense to copy Bechet," Lauer explains. "It's about finding out how it interacts with your own world, and what energy is borne of that."

And so Bechet's sound cosmos is given new clothes, with Lauer, Tempel and the NDR Bigband intelligently and profoundly interpreting the contrasts that lie between the lines in these catchy and emotional tunes: on standards that Bechet lent his inimitable signature to, such as Harry Barris' "Wrap Your Troubles In Dreams" and "On The Sunny Side Of The Street"; but even more so on his own famous songs from his Paris period, from the title track "Petite Fleur" to "Les Oignons" through to the Magrebinian-influenced "Casbah - Song of the Medina". Right from the intro, Tempel's mastery can be heard, letting the NDR Bigband take paths that branch off the streets of Antibes - "Dans Les Rues D'Antibes" -, only to have Lauer's saxophone artistically entice them back onto main street again. And even for Lauer, "Si Tu Vois Ma Mere" is the best proof "of the incredible power of these almost forgotten works. They are really catchy, and yet at the same time artistic."

"We tried out a lot more songs than could go onto the CD," Lauer recalls, but one surprise, Fats Waller's "Honeysuckle Rose", is on the album, and it has its own special relevance: "Early on in my career, I was supposed to play that in an old-time ensemble. I turned up at the rehearsal, played it the way I'd learned it, garnered disapproving frowns and never went there again. It didn't work at all, and now I wanted to make up for that – doing it my way." "Petite Fleur" is the best proof of how worthwhile it is to rediscover tradition from time to time, just as one recaptures one's own biography.