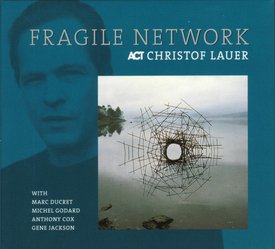 Christof Lauer has long been counted as one of the most important saxophonists on the European jazz scene. His tenor solos on "Flying Carpets" and "Facing Interviews" and the soprano solos on "Ferma L’Ali", and "Human Voice" are only a few of the many examples of his abilities as a relaxed, self-assured storyteller on the one hand, and a hard-blowing bundle of energy precariously balancing on the borderlines of the physically possible on the other.

Because Lauer understands jazz’s and European classical music’s past, he is able to pick and choose from the rich abundance of creative ideas and styles which his many predecessors have produced, and integrate what passes best into his own personality. In this sense, he is a traditionalist; the voices of the past are quoted but not copied.

In Frenchman Michel Godard Christof Lauer has a virtuoso partner whose deep, dark sounding tuba is not limited to the traditional bass roll. Instead, Godard employs the tuba and the serpent, a medieval bass horn, as Front-line melodic instruments. His agile Tuba solo an "Vernasio", and the mystic and melancholy Serpent solo on "Ferma L’Ali" are extraordinary.

Guitarist Marc Ducret is also French. He is one of the most important and - heaviest - avant-garde virtuosos in contemporary European jazz. He threads his musical patterns around and through rock, funk, and jazz, embellishing them with an exotic filigree-like fancy. In "Human Voice", concealing his shrill, aggressive tone, he reveals how sensitively he can communicate with the other players.

The American bassist Anthony Cox first began working with Christof Lauer during the preparation for Lauer’s album "Evidence’. On "Fragile Network", he provides a strong, pulsating bottom on both acoustic and electric bass. He has a great acoustic bass solo on "Facing Interviews". He plays electric bass on 5 of the 9 pieces.

Afro-American drummer Gene Jackson has been the drummer in Herbie Hancocks acoustic projects since 1990. "That shows how incredibly flexible he is," comments Lauer. "He’s open for everything, and plays without being boxed-in by categories." On "Werther", a well-worked-out reminiscence of Lauer’s beginnings in rhythm-and-blues and rock bands, Jackson beats out his funky rhythms, while on "Human Voice" he provides for a warm counterpoint to Marc Ducret’s guitar.

With Christof Lauer, ACT has signed, after Nguyên Lê and Nils Landgren, another one of Europe’s top jazz "Acts". Saxophonist Lauer has long been considered a "musician’s musician", a favourite among his fellow players because of his absolute honesty in regards to his individual style, a style which combines an energy, discipline, and staying power that to him is worth more than all the current "in" modes and momentary trends. Over the years his playing has ripened into a mature sound which continues and builds on the tradition of soulful jazz-funk, the honkers of the 50’s, the heart-felt tenderness of Ben Webster’s ballad-style, and the impulsive energy of John Coltrane.

"Fragile Network" is Christof Lauer’s debut album on the Act label, and is his fourth album as a band leader. lt underscores his qualities as an imaginative composer and arranger, and as an exceptional soloist. In quartet and quintet formations, he and his band weave an ever so transparent and flexible gossamer web. The fragile impression is deceiving; the strands of this web are elastic and tear proof. The band can stretch, turn, and twist the thematic material just about any way they want. Only after this web is put to the test through the band’s sinuous and unyielding improvisations is it clear how flexible and resilient the fabric really is.

"Jazz is about communication," states Christof Lauer, and that says what is most important. For, contrary to what many people Feel, this self-willed soloist - composer - band leader senses freedom and beauty not as antagonists, but as inseparable parts of the whole. For Christopher, the continual flow of creative thoughts and freedom of expression are the deciding criteria for music that is worth playing and listening to. "Naturally, it only works where you have an understanding of jazz tradition; but that doesn’t mean that when you know what they did 70 years ago in New Orleans, you have to play in that style."

Christof Lauer’s basic musical concepts were formed during the wild "free - jazz" movement of the 60’s. He experienced the action from the sidelines; at that time Lauer, the son of a pastor, was diligently practicing cello, attending Dr. Hoch’s conservatory in preparation for studies at the high school for music.

Christof switched to tenor saxophone in 1971, and moved to Graz, Austria a year later to study music at the Graz conservatory. He lived in Graz until 1994, when he began his years of learning and travelling, working primarily with bands out of Munich and Vienna. He became a member of the Frankfurt’s Hessen Radio Jazz Ensemble in 1979. In 1986 he won Germany’s Southwest Radio jazz prize, and in 1990 was given the German record critics’ prize for best album of the year for his debut album, "Christof Lauer". In 1993, he became a soloist for the NDR Big Band, in 1994 a member of the United Jazz and Rock Ensemble, and in 1996, a member of the Albert Mangelsdorff Quintet. The same year, his album "Evidence" was awarded the French recording industry’s "Choc de l’année" prize, along with the quarterly German record critics prize for best album.