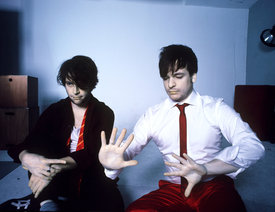 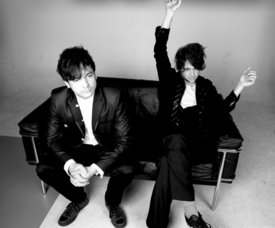 They are the ‘odd couple’ of German jazz: pianist Chris Gall and singer Enik – style pirates, musical buccaneers and genre-breakers extraordinaire. “We are two characters as different from one another as chalk and cheese who have collided together,” says Chris Gall. He comes from a jazz background, Enik from indie and pop.

The headstrong duo undertook their first joint foray into foreign waters at the beginning of 2008 with their album Climbing Up (ACT 9659-2). As a “jazz trio with guest vocals” (Enik), they dedicated themselves to a stylistic pluralism. “The CD rocks and often sounds independent, powerful, with faster beats and long text or melody phrases,” wrote Jazzthetik at the time. It was jazz bringing out the pop elements – a sound that hadn’t been heard emerging from German studios in a long time.

Only two years later and the loose, riotous faction had developed into an established formation. The successor Hello Stranger was recorded and mixed by Swedish sound engineer genius Ake Linton and is, according to Enik, “a logical consequence of our work up until now, which has really brought us forwards.”

Categories and pigeonholes are taboo here. The multi-layered matrix becomes apparent in the opening piece, “Eins Plus Eins”, a pounding rhythmic work with concise piano hooks and a physical presence that can be felt without reaching too deep into the overdub and effects box. Live Chris Gall trio classics such as “Tap The Beat On The Glass”, which has the power to make even the strongest purists secretly tap their feet under the table, are here mixed with tracks such as the reflective and melancholic ballad “One Gram”, which can be seen as a homage to sleep. That the introductory chord of “Hello Stranger” sounds a little like Lou Reed’s “Walk on the Wild Side” may be a coincidence yet in the interplay with the express oscillation of “You Fit Perfect to Me”, both songs end up as a surreal span of images through tempos and moods.

“I wanted another sound right from the start, a sound that you wouldn’t expect from a jazz piano and so I tried to think like a guitarist,” says Chris Gall describing his fundamental idea. “To become more pop sounding was, in contrast, never a thought,” says Enik. “That happened on its own, out of a love of simplicity. Unconsciously, though, our joint fascination for some Beatles’ songs probably also played a role, songs which are complex but which rarely sound it.”

On Hello Stranger, Chris Gall and Enik have continued to reduce their music, which was so successful on Climbing Up, to the essentials until it is possible to recognise all the melodies in the seemingly simple and catchy ones. It’s a musical balancing act: modern jazz as the great, all embracing style which gives other influences room to breathe again, released from their commercial straitjacket. Jazz exists here as the final liberty for playing everything that one feels.