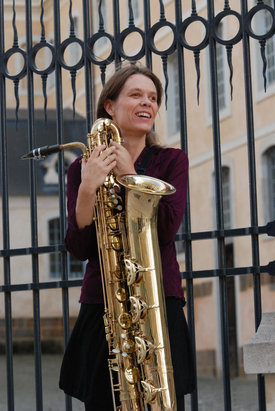 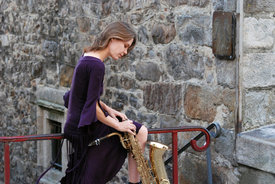 It was a recommendation of ACT guitarist Nguyên Lê that first brought the French baritone saxophonist Céline Bonacina to the attention of label boss Siggi Loch. Once again the exchange and sense of community within the "ACT Family" has provided the impetus for an exceptional musical discovery. In this way Esbjörn Svensson, for example, played in Nils Landgren’s Funk Unit before his international career with e.s.t. whilst Korean singer, Youn Sun Nah, came to ACT through her work with Ulf Wakenius and Lars Danielsson. Nguyên Lê first met Céline Bonacina in 2008 at a festival. “She told me that my album Bakida (ACT 9275-2) had had a strong influence on her musical development. Then, two years later, she asked me to play on a few tracks of her new album Way of Life. Since then, my involvement in the album has grown continuously from guitarist to sound engineer to co-producer. That the album is now being released by ACT makes me especially happy for Céline.“

Céline Bonacina studied in Belfort, Besançon and Paris. She won numerous prizes for her saxophone playing and gained her first jazz experience in Parisian big bands. She worked with artists such as the Cuban pianist Omar Sosa and the saxophonist Andy Sheppard. Céline Bonacina’s debut album, Vue d’en Haut, was widely acclaimed by the French jazz press and its success lead to appearences at French jazz festivals. One of the most well known of these, Jazz á Vienne, voted her, in 2009, the winner of its Jazz Competition – the prize a festival performance in 2010 and production of her new album Way of Life.

"I couldn’t stop admiring the vitality and beauty of her music and constantly discovering new forms of diversity and exceptional expression in her,“ enthused Nguyên Lê about Céline Bonacina. “This young woman has the will and urge to break through boundaries and set herself apart from the masses and this also made her choose such an impressive instrument as the baritone saxophone on which she plays on most the tracks of the album. During our work together I was always discovering new facets of her artistic personality. There is such a contrast between Céline’s graceful appearance, her gentle and spiritual yet also slightly impish manner, and the fire which burns in every single one of her sounds.“

To play with immense complexity whilst, at the same time, always maintaining the “grounding” in a strong groove with enthralling, almost danceable rhythms – this is the appeal and the emotion of the music on Way of Life. Bonacina acquired this musical ability particularly during her seven-year-stay on the French Réunion Island in the Indian Ocean and her contact with the music of this region. The driving funk of "Wake Up", the Afrobeat pulse underlying "Ekena" and a bouncy dub and reggae "Course pour Suite" determine the rhythm of this album. When united to an irrepressible joyfulness in music making and energy the result is a refreshing renouncing of understatement at a time when a certain melancholy is creeping into jazz.

Strong musical characters complement Céline Bonacina: the drummer, Hary Ratsimbazafy, from Madagascar, provides an irresistible beat – elegant but powerful. This is smoothly combined with the E bass of Nicolas Garnier who gives the music a touch of classic rock and fusion. On four tracks the power trio is reinforced further by Nguyên Lê on the E guitar which, once again, shows him to be, after the quieter, world music sounds of his last album Saiyuki (ACT 9483-2), more powerful whilst, at the same time, also contributing delicate and unexpected brilliant nuances to the music.

In the album’s liner notes, Nguyên Lê writes: Way of Life is an illuminated path on which opposites and extremes come together in a seemingly effortless and natural way: strong melodies interchange with wild, screeching outbreaks and a deep, grounded distortion; stirred-up unrest charged with driving rhythms. I hope that all listeners have as much enjoyment with Way of Life as I had in discovering the album and working on it. May you have a great and long career, Céline!“