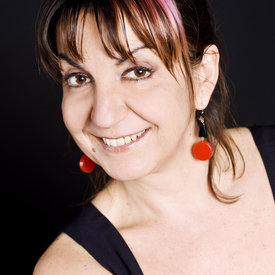 Carla Marcotulli was born in Rome, Italy in 1962 and studied flute at the Conservatory of Music in Frosinone. She also studied voice and sang with the conservatory’s Big Band and performed as a soloist in the Gospel Choir.

She began her professional activities as a jazz singer in the early 1980s, performing with jazz artists such as Massimo Urbani, Larry Nocella, Danilo Rea, Roberto Gatto, Giovanni Tommaso, Nicola Stilo, and her sister, the pianist Rita Marcotulli.

In 1983 she performs beside Chet Baker at the “Four Roses Jazz Festival” in Rome, and is later invited by Carmen McRae to sing with her at a concert at the Music Inn.

The label Fonit Cetra published an album under her name titled “Flying”, in 1986. In 1987 Carla participated in Chet Baker’s last recording: “Chet on Poetry”. At this time she also began training classically, which would provide her with a wider range of musical expressivity. She collaborated with composers such as, Claudio Ambrosini, Nicola Piovani, and Giovanni Mancuso.

In 1990 she joined the Keptorchestra directed by the Tonolo brothers.

Carla Marcotulli was invited to sing at Umbria Jazz Winter in 1993 with Giovanni Tommaso’s Quintet. She sang on the CD “Over the Ocean” by Giovanni Tommaso, which was awarded “Record of the year”.

In 1994 she sang Opera in New York, at the Kennedy Center in Washington DC, and in Puerto Rico.

Carla sang in Germany with the experimental trio “Neue Note” led by the pianist Klaus Treuheit in 1996 and 1997.

She has collaborated with the singer/composer Paolo Pietrangeli, participating in two of his CDs.

In 1999 Carla sang with Tommaso Vittorini’s Orchestra and Big Band at the Eliseo theatre in Rome. In the same year she worked with the trumpeter Luca Bonvini on a project that included Cameron Brown, Vic Juris, and Elliot Zigmund. In 2001 she joined the composer and saxophonist Mario Raja and the writer Domenico Starnone in “Amori Imperfetti” which was presented at the Umbria Jazz Festival.

In 2006 Carla met the arranger and composer Dick Halligan, best known as the founding member of the group “Blood, Sweat & Tears”. They worked together on Carla’s actual project with a string quartet, until a new Jazz Quartet was born. On How Can I Get To Mars? (ACT 9720-2) Carla is interpreting songs by Dick Halligan and well-known standards.