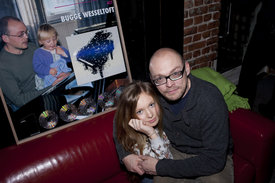 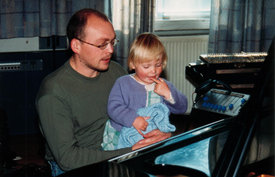 When It´s snowing on my piano was released as a CD in November 1997, Tom Hammerø from Oslo’s biggest daily newspaper, Dagbladet, wrote, "Bugge Wesseltoft has recorded the nicest Christmas album that I’ve ever heard.” The journalist was writing not only for himself but also spoke on behalf of many, many listeners. The Norwegian pianist had succeeded in creating a classic which, every few years, manages to captivate music lovers (not only) at Christmas. The album has, meanwhile, become cult and has sold 100,000 copies so far. It is the best selling ACT production ever.

The success story began in Stockholm, in September 1997, when ACT’s label boss, Siggi Loch, discovered the painting "It´s snowing on my piano" by Ardy Strüwer in Nils Landgren’s flat. The next day, in Oslo, he suggested to Bugge Wesseltoft that he record a solo piano production "with Christmas in mind". Bugge is a declared opponent of a commercialised Christmas yet he found the idea of making a CD with Christmas music, which his young daughter would also like, interesting. In October everyone then met in the Rainbow Studio and, with his daughter Maren on his lap, Bugge began to fantasise about Christmas songs and old folk tunes. It is probably precisely this carefreeness which defines the magic of It´s snowing on my piano. Yet perhaps the fascination also lies in the fact that this is Wesseltoft’s first solo recording: you can feel the desire for discovery and originality in every sound – as they say, “the first cut is the deepest”.

Wesseltoft brings out the true beauty of the piano with an intimate sound language, the art of subtle variations and a pronounced dramaturgy. The whole wealth of his puristic piano music reveals itself in minimalism. “It’s very calming to hear Christmas songs which aren’t tacky with pathos and sentimentality but which only exude calm and tranquillity which is suited to the period in between the end of one year and the start of the next,” wrote Jazzthetik about Wesseltoft’s interpretational approach. It’s snowing on my piano is not just any old Christmas CD – with its almost celestial beauty it is, quite possibly, “the greatest to come from contemporary jazz.” (Westdeutsche Allgemeine Zeitung)

The bonus DVD which comes with the platinum edition shows excerpts from Bugge Wesseltoft’s only Christmas concert, until now, as guest of Nils Landgren’s Christmas Concert With My Friends (ACTDVD 9901-9) on December 4, 2005, in Märsta / Stockholm, Sweden. The concert is a dream come true for the Swedish trombonist, “I’ve always wanted to record songs like these which exude joy, but in the company of good friends and in the way that I want so that I could totally focus on the music.” His friends are old companions including Viktoria Tolstoy, Jeanette Köhn, Lars Danielsson, Johan Norberg, Ulf Wakenius, and, of course, Bugge Wesseltoft, who stands out as pianist in the four select tracks of the bonus DVD. STERN magazine aptly described the unique Christmas concert: “Classic trombone choirs, instrumental jazz, standard Christmas melodies and quiet Swedish folk songs – this mix, which appears unusual on first hearing, creates a unique atmosphere and touches you right in the middle of your heart. A meeting of good friends. Luminous. Glistening. Festive.”

Bugge Wesseltoft, born 1964, is one of the most notable Norwegian trendsetters in contemporary European jazz. As a leading talent, he works both in the foreground as well as the background. He is regarded as the “mastermind” of a whole new generation of musicians which fuses classic jazz with electronic music. Under the title and CD of the same name, New Conception of Jazz, Wesseltoft strives for a synthesis of live electronic music and improvised jazz. In addition to this, he also focuses on purely acoustic piano playing. With his own record label, Jazzland, which he established in 1996, he has created a platform for the Norwegian music scene which enables artistic freedom away from commercial mainstream. Bugge Wesseltoft works with well known artists such as Sidsel Endresen and Jan Garbarek.