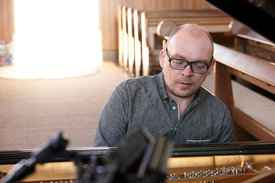 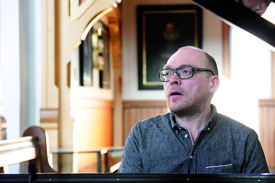 Cover art by Amy Simon, 2014, by permission of the artist

There can be very few musicians who are capable of making silence as audibly vivid as the Norwegian Bugge Wesseltoft, in particular in his solo piano recordings. For twenty years, the most successful of these, “It’s Snowing On My Piano”, has been treasured as a haven of wintry stillness and contemplation. It is a classic album. Listeners all over Europe have responded to it by giving it a permanent place in their lives. So now Bugge Wesseltoft and producer Siggi Loch have returned to the original concept of “Snowing” in “Everybody Loves Angels”. The title is a metaphor for the kind of weightless ease which the music conveys; and this time it's not just for winter...

The success story started in 1997. Bugge Wesseltoft had just released the album “New Conception Of Jazz” on his own newly-founded label Jazzland. That album broke new ground, combining electronic sounds and grooves with his unmistakeably limpid, transparent piano playing, and the result was a timeless work of art. It left an indelible mark on subsequent generations of pianists, and established him as one of the most important innovators in jazz. ACT label boss Siggi Loch had been following Wesseltoft with interest for quite some time, and made him an offer: to bring a very different side of his musicianship to the fore, and to record a completely acoustic solo piano set “with Christmas in mind” for the fledgling ACT label.

Wesseltoft is vehemently opposed the over-commercilisation of Christmas, and yet he did find himself attracted to the idea of recording music which would restore quietness to times in which everything is getting inexorably louder. So Bugge Wesseltoft and Siggi Loch met up at Oslo's Rainbow studio. With the pianist’s little daughter Maren perched on his lap, Wesseltoft started to improvise on Christmas songs and folk melodies. That first solo piano recording was to be the most successful – it achieved the highest sales in the history of ACT. As the popular German newspaper WAZ wrote at the time: “In its almost unworldly beauty, It's Snowing On My Piano is the greatest Christmas CD that jazz has ever produced.”

Now, twenty years later, the world is a very different place. A non-stop flow of virtual data, and ever more complex and opaque structures and contexts govern people's everyday lives. It is a world in which the loudest often comes out on top. So, more than ever, people long for a place of sanctuary where they can just have the chance to slow down. Bugge Wesseltoft, who worked for a time in a clinic looking after traumatised patients, has a special insight into the power of music to bring solace to disturbed minds. That is why he was so enthusiastic about the idea of finding another quiet place to record “Everybody Loves Angels”. This time they went to the rugged beauty of the Lofoten region, and to the largest wooden church in Norway. “LofotKatedralen” is also a concert venue and has a superb Steinway piano.

The location for the recording has a particular significance for Wesseltoft: “Over the years”, he says, “nature has become an increasingly important source of inspiration for me. In this place there are moments when I experience the feeling of being part of something much bigger. There was no place which could have felt more natural for this recording than Lofoten. The area is beautiful but also harsh, as is life here, just as it was for my great-grandfather, who was born here. To make a recording in the unbelievable LofotKatedralen brought all these things together for me.”

In his interpretations of songs by Lennon/McCartney, Paul Simon, Johann Sebastian Bach, Bruno Mars and several others, Wesseltoft has a way of shaping the sound of notes and chords, and of opening up spaces between notes that is uniquely his. As he plays, he does not follow any fixed plan, metre or arrangement; what happens is completely subservient to intuition in the moment. Every sound stands on its own merits. It is as if Wesseltoft is listening his way through into new spaces that open up for him, which then lead on to other doors through which he and the listener can step together. This world of contemplation is a musical counterweight to the zapping mentality of our time. The slowness and the pared-down state of the music permit listeners to find their own stories, colours and shades, to enter into spaces which they will want to visit again and again – and in any season.