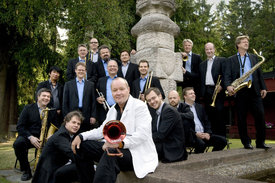 As diverse and vibrant as the Swedish jazz scene may be, it’s not possible to avoid market trends even here. There are only two professional, continuously working big bands in the country – the Norrbotten and the Bohuslän Big Bands. The latter originated during the Fifties from a military band whose tradition dates back to the early 19th century. The Bohuslän region and the city of Vara support the orchestra, which allows the group to develop its diverse activities, ranging from performances at Swedish schools to regular appearances at the big international festivals with about 100 annual concerts worldwide.

The Bohuslän Big Band has always aimed to uphold the big band tradition and ensure its further contemporary development. That their extensive project work, so far recorded on sixteen albums and one DVD, revolves around this intent goes without saying. The orchestra has over many years collaborated with well known composers and arrangers: Maria Schneider, Bob Mintzer, Kenny Wheeler, Avishai Cohen and Bengt-Arne Wallin to name but a few. Most recently US trumpeter Lew Soloff collaborated on a Gershwin project with the band, and star bassist Steve Swallow compiled a programme for the Jazzbaltica Festival 2009 from his repertoire, appropriately entitled “Swallow Songs”.

Since 2007 Nils Landgren has been the artistic director of the Bohuslän Big Band, a role for which he is perfect in many ways: “Mr. Red Horn” is one of the world’s best trombonists and one of the best known jazz figures in Scandinavia. As a long term member of the NDR band, he understands the orchestra mindset perfectly. He is professor at the Hamburg School of Music, a producer as well as director of the Berlin Jazz Festival and has a great wealth of experience behind the scenes. As well as this, he has also always shared the evolutionary approach of discovering new regions with a great respect for jazz history – whether with his “Funk Unit” or in various classic, folk, soul or pop projects with the likes of Joe Sample, Esbjörn Svensson, Michael Wollny, Viktoria Tolstoy, Rigmor Gustafsson and Ida Sand.

Perhaps it was because he was in the spotlight for several years as singer that Landgren thought of the idea of recording a Cole Porter programme with the Bohuslän Big Band. Porter was the genius who embodied the rare union of songwriter and composer and who created a large part of the “Great American Songbook”. “Of course I have always loved Cole Porter’s music and I’m certainly not the only one, but there was one song in particular, “Don’t Fence Me In”, that I couldn’t get out of my head. For years it suited my understanding of jazz so well, like a motto - I don’t like being restricted or tying myself down,” says Landgren.

The venture certainly wasn’t without its risks – almost all great jazz figures have already presented their own Cole Porter versions, and therefore an arranger was required who would make the songs his own, especially for the Bohuslän Big Band. Landgren remembered his collaboration with Englishman Colin Towns for the NDR Big Band, as well as for a Frank Zappa project – something which the Bohuslän Big Band had also undertaken. “He did it so brilliantly and made it so unique, in the best sense, that I decided to call him about the Cole Porter project and he immediately said yes,” says Landgren.

That was in 2007 and Towns took his time for this very special project. “I had to find a key which would open a new door to Cole Porter and which would make the musicians feel challenged, happy and spurred on. I found it in my many years work for the theatre. Cole Porter’s world was also that of the theatre and by looking at the texts without their melodies, a door opened.” In 2009 the band went on a tour of West Sweden and in the end, all those involved were so satisfied and pleased with the outcome that they wanted to capture it for posterity.

And so here it is, the Bohuslän Big Band featuring Nils Landgren and Colin Towns with Don’t Fence Me In. From with the introduction of “From This Moment On”, it becomes clear why Nils Landgren proudly says, “Colin exceeded all our expectations.” The man who has written the music for 21 films, 33 TV dramas, 14 animated films, 13 documentaries and 26 plays has paved the way for the band to present an exuberant, dynamic, almost burlesque yet still previously unheard and multilayered interpretation of twelve Cole Porter hits. All songs have a modern rhythm, and even nominally tranquil ballads like “Begin the Beguine” develop an enormous force. What really stands out are the wind sections: Colin Towns’ arrangements simply burst with finesse, variation, superimpositions and opposing question-and-answer games. This gives the pieces a vivid, almost picture-like quality, which is hard to match and takes the band as well as the listener to new places with every passing note. In this way the listener can almost physically feel the heat in “Too Darn Hot”, see a colourful musical in his mind’s eye when listening to the title track (not least thanks to the phenomenal vocal duet of Landgren and saxophonist Johan Borgström) or imagine a full stage set for “Miss Otis Regrets”.

When the album rolls to its end with the beautifully soft “Every Time We Say Goodbye”, with its enlightening hymn-like character, it becomes clear that Colin Towns, Nils Landgren and the Bohuslän Big Band have met the Cole Porter challenge. With boundless enjoyment, untamed passion and unharnessed virtuosity, the album demonstrates what possibilities still lie in orchestral jazz today