New sounds from the
ancient instruments of Korea 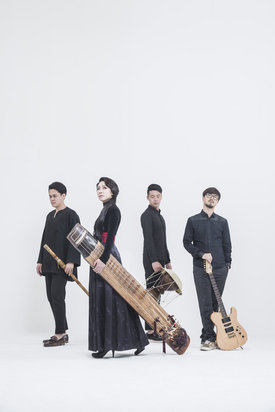 A hard stick made from the kind of narrow bamboo that grows by the Korean sea-shore is used to pluck low-pitched strings made of twisted silk. The deep, beguiling tones that emerge from these completely natural materials could have been heard at any time since the seventh century, because Korean music has a continuous tradition far longer than Western music. The stick is called a suldae, the stringed instrument is a geomungo or six-string longboard fretted zither. It is the voice at the very heart of that tradition, with a role comparable to that of the piano in the West.

Yoon Jeong Heo, the bandleader, instigator and passionate driving force behind Black String, is a specialist on the geomungo. She studied with a leading master of the instrument, and when she talks about her musical heritage, there is no doubting her total commitment to it: “I want people to hear this music. It is powerful. It is beautiful and it is valuable,” she says. And Korean singer Youn Sun Nah is full of praise for her: “Heo shines even brighter because she carries the weight of tradition.”

That desire to communicate a centuries- old power and beauty to audiences is also important. Heo’s father was a theatre director, and the thrill of performance is what motivates Heo: “My best place is the stage, I am definitely happiest there, that is my identity.”

An opportunity to broaden out what she does came in 2011 when she was asked to assemble a project for a collaboration with UK jazz players such as Tim Garland and Gwilym Simcock. She invited two musicians, each with something very different to offer, to travel with her. The first, Aram Lee plays the traditional Korean bamboo flutes, the Daegeum and the smaller higher-pitched Danso, and also the Yanggeum a hammered dulcimer with metal strings. The second, Jean Oh, brings another dimension to the band. He is a jazz guitarist whose studies in Paris and later New York brought him into contact with musicians such as John Scofield, Uri Caine and Steve Coleman.

UK writer Philip Gowman, a specialist in Korean music, reviewed one of the early concerts in London, describing it as “a triumphant fusion of improvisatory styles, played in a warm, enveloping acoustic. It was a shame that the event was not being recorded, as I would have subscribed for the CD there and then.”
After the band had returned to Korea, Heo knew she wanted to bring a stronger rhythmic backbone to the group. The trio tried working with different percussionists, and were pleased to find Min Wang Hwang. He plays the janggu, the traditional hourglass-shaped drum, and also sings. The group with this stable personnel now works as a quartet worldwide. “Before we recorded, we had already toured with it and played it a lot live,” says Heo.

What Black String have achieved remarkably on this album is to extend the tonal palette of the traditional instruments, the range of colours and timbres is quite mesmerising. In “Flowing Floating” - inspired by Esbjörn Svensson Trio‘s version of “The Face Of Love“ - Heo creates a drone sound by using the combination of bow and loop pedal. In “Mask Dance", Lee experiments with unvoiced breath on the daegeum, producing a sound which is both contemporary and visceral. Jean Oh brings a whole range of guitar-sourced sounds and pure electronic sounds, notably atmospheric popping sounds like falling raindrops at the start and the conclusion of “Growth Ring.” Heo uses the bow again towards the end of “Strangeness Moon” to create unforgettable other-worldly harmonics on the borders of spiritual silence.

Improvisation has been present in Korean music for centuries, in the ensemble-based “sinawi” which accompanied shamanistic rituals, and the “sanjo” - literally meaning scattered melodies – for soloist and drum. Heo says that the closest the band reaches in this direction is in “Mask Dance” “We play together, we make contrasts, we share and follow pitches, and there is a minor thing going on which is very close to Korean traditional forms and scales.”

Pulling this kaleidoscope of sounds and influences together is the remarkable bandleader herself. Heo has clear instincts as to how she wants to lead a band: “I believe strongly that is is important to talk. When we meet in the band to rehearse, first we talk. And then we practice. To make a really good sound we have to share each others' minds.” That may well be the secret behind the fact that you never hear a crowded or muddy texture, everything has freshness and clarity.

Korean music is a remarkable sound-world. In the words of American composer Alan Hovhaness “It is one of the most expressive music types in the world, majestic and free. The naturalness and mysteriousness of its melodies are unmatched by any other music in the world.” What Black String have done is to create an astonishing coalescence of the old and the new. Theirs is a captivating sound world where power and beauty are both present in every moment.