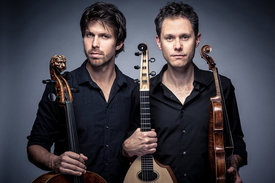 Produced by BartolomeyBittmann and Olaf Schuberth

"It is very rare to hear string players relishing the groove quite so joyously. BartolomeyBittmann embody the musical virtues of unbridled playfulness and rhythmic radicalism, and they deploy them with an ease that is not normally associated with classical instruments." (Wolfgang Muthspiel)

An album that throws wide the gates to a listening experience as wonderfully atmospheric as it is deep: with their third album, "Dynamo", BartolomeyBittmann have conceived a daring new musical work that - once again - entices the listener to join them in a fascinating world of sound.

One thing must be said about this duo: narrowmindedness and undue attachment to tradition have no place whatsoever in its musical ethos. Matthias Bartolomey (cello) and Klemens Bittmann (violin & mandola) have their own ideas and are blazing their own musical trail, a path leading well away from the familiar and the commonplace. It’s been several years since they joined forces to compose and develop a contemporary repertoire for their characteristically classical instruments. Now, with "Dynamo", the duo has arrived at the heart of their very own individual sound.

The two Austrians have worked together as a duo since 2012. Violinist Klemens Bittmann has always chosen a path close to crossover. After classical studies at the University of Music and Performing Arts Graz, he studied jazz violin with Didier Lockwood in Paris. His work in collaboration with the accordionist Klaus Paier, with the guitarists Alegre Correa and Wolfgang Muthspiel, the trio folksmilch, and as a duo with the woodwind player Georg Gratzer, have been the determinants of Bittmann's artistic career. He also has a teaching post at the University in Graz. As an arranger he was responsible for the groundbreaking "Celebrating The Mahavishnu Orchestra" recording by radio.string.quartet.vienna and released by ACT. Cellist Matthias Bartolomey’s career to date has been more firmly anchored in Western classical music. As a graduate of the University of Music and Performing Arts Vienna and of the illustrious Mozarteum in Salzburg, he has worked with the Vienna State Opera Orchestra/Vienna Philharmonic, the Chamber Orchestra of Europe and the Mahler Chamber Orchestra. Since 2010 he has been principal cellist of Concentus Musicus Wien, founded by Nikolaus Harnoncourt. BartolomeyBittmann is a project close to the hearts of both players.

Their first two releases, "Meridian" (2013) and "Neubau" (2015), were hugely persuasive as a result of their innovative approach, a burgeoning wealth of ideas, and from the duo’s way of being so multi-layered and self-sufficient. Numerous concert appearances have taken them all across Europe as far as Russia, to Iran and the USA, and even to Kenya and Japan. With "Dynamo", BartolomeyBittmann have established a definitive and unique sound, which is theirs and theirs alone.

Matthias Bartolomey and Klemens Bittmann allow their melodies to flow through wildly divergent moods and musical landscapes, rendering futile all attempts to stylistically pinpoint their musical language. They can change their intensity at a moment’s notice with sensitivity and precision, molding their pieces into absorbing stories told with overarching suspense and ever-changing moods. They combine the energy of rock - including that of the harder variety - with the elegance of chamber music, the inventive joy of jazz, and the emotional depth of singer-songwriters, dipping briefly into folk music now and then while managing to pay homage to their classical roots… all this is testament to the duo’s special grasp of how music can be made into a truly enthralling, deeply moving experience.

The duo’s pieces unfold in tones that are both unusually varied and lyrical, even magical - something in the music plants multicolored images in the mind, leaving lasting impressions behind. At one moment the listener is captivated by the beauty and gentleness of the sound; in the next the power of the music takes one’s breath away. The immense playfulness of still other passages is simply astounding. Bartolomey and Bittmann’s pieces dance, they celebrate; they give themselves up to sweet melancholy; they groove, they strive to penetrate the mysterious… and they dream.

"Dynamo"decisively answers the question of how BartolomeyBittmann has come to stand in its current position. The two musicians leave no doubt as to their right to a place with the cream of Austria’s music scene, as well as to the excellent international reputation that they enjoy. It’s a real pleasure to take an aural stroll through the duo’s imagination; their music manages to strike just the tone that opens directly the floodgates of the soul, inviting the listener to be completely bewitched by their presentation and their warm, enveloping timbres from the first moment on.