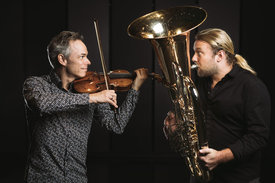 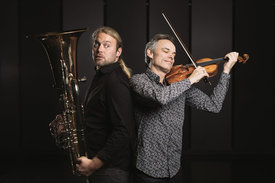 Dreams are dreams – but this thing really happened. The violin and the tuba could not be more different as instruments, but the biographies of Benjamin Schmid and Andreas Martin Hofmeir have some similarities: both have been award-winners at the ECHO Classics (Hofmeir was the first tuba player ever to win one); both are professors at the renowned Salzburg Mozarteum; and both are equally at home in classical music and in jazz.

Benjamin Schmid is “one of the most valuable of today’s golden-age-violinists”. He has performed on the world’s major stages with renowned orchestras such as the Vienna Philharmonic, the Philharmonia Orchestra London, the St. Petersburg Philharmonic, the Concertgebouw Amsterdam under conductors such as Christoph von Dohnanyi, David Zinman, Seiji Ozawa or Valery Gergiev. As one of the most versatile of today's violinists Schmid combines his qualities as a soloist, the extraordinary broad range of his repertoire – in addition to the usual works he also plays the violin concertos by Hartmann, Gulda, Korngold, Muthspiel, Szymanowski, Lutoslawski and Reger – with his remarkable skill in jazz improvisation.

Andreas Martin Hofmeir, who at present is certainly one of the best and most versatile instrumentalists, loves to commute between different genres: As a soloist in classical music he performed with the Münchner Philharmoniker, Rundfunk-Sinfonieorchester Berlin, Konzerthausorchester Berlin, NDR Radiophilharmonie, Bruckner Orchester Linz, Orchester des Nationaltheaters Mannheim and many others. But he is not only a sought-after soloist and chamber musician, Hofmeir also founded the popular Bavarian band LaBrassBanda and has been standing on stage as a cabaret artist for seventeen years.

Their repertoire here ranges widely: alongside well-known but re-imagined classical music pieces, such as the “Passacaglia” (on a theme of Handel) by the Norwegian composer Johan Halvorsen, or the breakneck “La Ronde des Lutins” by Bazzini, the focal point of “Stradihumpa” consists of four original compositions. Jörg Duda from Munich is in effect a composer-in-residence for Hofmeir, and he has contributed the very classical and virtuosic “Duetto”.

Christof Dienz’s “Concertino vom Lande” (Countryside Concertino) presents Austrian foibles and faibles: the stuttering first movement portrays a teetering tractor driver. The next movement “Am Abend dann” (And then in the evening) relishes evening boredom in artistic terms. That tedium can only be broken by watching television together. So “Beim Fernsehen” (Around the television) quotes programme theme tunes and advertising jingles from Austrian TV, darting from one to another with the stylized restlessness of channelzapping.

“1+1=3: The Abstraction Of Beauty” is a work by the young and hugely promising composer Florian Willeitner, a hymn-like chorale is its starting point, and from there a work of almost symphonic proportions evolves, exploring all the technical capacities and pitch extremes of the instruments. This piece does not shy away from drawing its inspiration from both jazz and hip hop – and from Prokofiev and John Williams.

The folk-dance “Unterkagner Ländler” is by Jan Koetsier, one-time conductor of the Bavarian Radio Symphony Orchestra. Three jazz pieces round off the album: “Miniature” and “Schnabulescu Bandini” by the Austrian polymath Georg Breinschmid were originally written for violin and double bass. In João Bosco’s “Latin Lover”, the violin provides a harmonic accompaniment for the tuba, and then shines in a final solo improvisation.