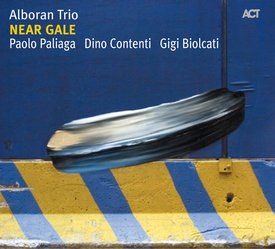 The classic acoustic jazz piano trio has experienced an amazing renaissance over the last few years, and the Alboran Trio is a perfect example of this renaissance. It is the ideal admixture of a disciplined, well-defined group sound and individual musicians playing with a maximum of freedom. The trio masterfully combines traditional jazz forms with elements of world music, playing with an ease and surety in which the most basic ideas dance hand in hand with the most complex. On their ACT debut CD, Meltemi, pianist and composer Paolo Paliaga, bassist Dino Contenti, and drummer Gigi Biolcati exhibit a timeless, stylistically open-ended jazz. In this respect, with Near Gale nothing has changed. Sailing is Paolo Paliaga’s second great passion – Meltemi are the strong, dry summer winds of the Aegean Sea, and Near Gale is also borrowed from the sailor’s lingo. It indicates the range on the Beaufort wind force scale shortly before a storm. A fresh Mediterranean breeze, blowing warm and strong – the ideal metaphor for the Alboran Trio’s music.

“We’ve gone in the same direction as we did with Meltemi” declares Paliaga, “but on Near Gale we’ve worked harder and were much more particular about the choice of compositions so that our sound is more precise, more defined. It’s even more what we want it to be. It’s more our own sound. We could have recorded a “standards” album. I also have that idea in my head. But now it’s about consolidating what we’ve started with Meltemi.” Once again all the compositions come from Paliaga (except for the last piece, which was written by Biolcati); once again, influenced by Paliaga’s work with Italian, French, Spanish, and Latin American musicians, the trio exhibits a fresh cosmopolitan flair as the three travel along new musical paths. The expressive sound of the piano’s dampened and struck strings on “Autumn Mist”, the unusual elastic African-influenced percussion colourings produced by Biolcati on “Also Sprach Raul” (“Thus Spoke Raul”), and Conti’s singing bass with its intimation of modern classic on “Invariable Geometries” exemplify the trio’s love of unusual ideas.

There are many treasures to be found in the group’s Mediterranean-permeated sound universe: lyricism, pauses rich with tension, harsh, biting breaks, and pulsating, dynamic loops replete with epic dramatics – something Esbjörn Svensson first introduced to a wider jazz public. But there are also quiet, stoic miniatures, swirling group interaction, and introspective solos. All this experimenting with dynamics, rhythms, and tonal colouring is at the beck and call of the themes and melodies.

Some things become clear when you know about Paliagas’s compositional style; “I never compose one piece at a time. I work on two or three together. I can’t do it any other way. The ideas can come from completely different directions. Sometimes they’re more melodic, sometimes more rhythmic; or they can have a more harmonic nature. I’m not looking for anything in particular; it’s much more that the music simply comes to me. It’s a natural process in which I’m just the instrument.” No easy process, by the way. “Most of the time it’s painful. When you compose there are always problems that crop up. I can finally relax only after I’m through.” Then it’s time to start working with the band: “At the beginning it’s a sketch. Each one contributes his part, and we keep working at it until everyone is satisfied. We’re the Alboran Trio, not the Paolo Paliaga Trio. I think that’s what makes us special. There are a lot of great soloists and leaders in Italy, but only a few groups where everyone is on an equal footing.”

Paliaga’s experience with adding the music to silent films has also played an important role; the Alban trio succeeds in creating moving images out of sound. There is a sensitive impressionism in this music that touches the emotions as it penetrates deeply into the listener’s psyche. Near Gale is a Mediterranean Sea journey of three musical explorers from head to heart.