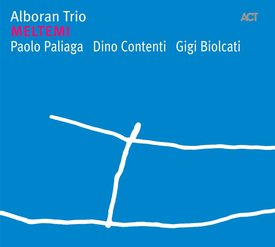 Alboran is the entrance to the Mediterranean, it is the waterway that joins the African and European continents, it is the sea that you enter upon arrival from all the other seas. Africa and Spain overlook this stretch of water, and infuse it with their essence and traditions, initiating something of a new beginning. The Mediterranean unites, mixes, meets, develops and metabolises cultures, sounds, people, religions and traditions. It remains as ever, bewitching; a founding place, an occult source.

The Alboran Trio is a significant encounter between three individuals, each with their own approach to improvised music, three musicians who breathe rhythm, three artists, who are constantly searching for a new sound and approach to playing. The main characteristic of the Alboran trio is the successful collaboration of three personalities, working together to realize a single musical vision. The programme is built around original compositions by the pianist Paolo Paliaga, and arranged by the trio. Rigorously acoustic in concept, the work of the musicians enhances our understanding of the vibration of skins, strings and wood. It concentrates on developing the art of melody, on interaction and spontaneous creation outside traditional genres and the mainstream of swing. The result is music, which is fresh, complex and full of nuance, music that comes from a jazz background yet moves freely between Europe and Africa.

Paolo Paliaga began his career as a jazz pianist in the early 1980's. After his initial experience with his own group, he played for many years in a bop band, where he learnt the "rules" of traditional North-American jazz. At the same time, drawn to a more European sound, he explored more contemporary styles. Attracted by the capitals of Europe, he moved to Paris in the late 1980's where he met and played with a number of musicians from different parts of the world and diverse musical traditions. He recorded music with a trio along with Marc Buronfosse and was a member of the group "Faena" with the Spanish guitarist Marco Quesada. They performed frequently in both France and Spain throughout 1992.

Meanwhile he became involved in composition. In 1997 he composed and performed music for silent film and in particular the soundtrack for Herbert Brenon's silent film "Peter Pan" (1924), and in 2003 he composed and performed the music for Vsevolod I. Pudovkin's film "The Mother" (1926). At the same time he founded the Latin-jazz group "Horizon Quartet", that often worked with Argentinean percussionist Luis Agudo. He has performed at numerous festivals with his own quartet and in 1999 took part in the "Varese in Jazz Festival" with Enrico Rava.