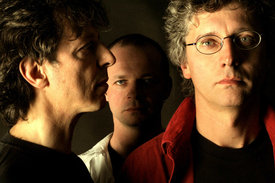 Paolo Paliaga, piano, born in 1961
Paolo Paliaga began his career as a jazz pianist in the early 1980’s. After his initial experience with his own group, he played for many years in a bop band, where he learnt the “rules” of traditional North-American jazz. At the same time, drawn to a more European sound, he explored more contemporary styles. Attracted by the capitals of Europe, he moved to Paris in the late 1980’s where he met and played with a number of musicians from different parts of the world and diverse musical traditions. He recorded music with a trio along with Marc Buronfosse and was a member of the group “Faena” with the Spanish guitarist Marco Quesada. They performed frequently in both France and Spain throughout 1992.

Meanwhile he became involved in composition. In 1997 he composed and performed music for silent film and in particular the soundtrack for Herbert Brenon’s silent film “Peter Pan” (1924), and in 2003 he composed and performed the music for Vsevolod I. Pudovkin’s film “The Mother” (1926). At the same time he founded the Latin-jazz group “Horizon Quartet”, that often worked with Argentinean percussionist Luis Agudo. He has performed at numerous festivals with his own quartet and in 1999 took part in the “Varese in Jazz Festival” with Enrico Rava.

• 2004, arrangement and recording of the CD “ Donna Lombarda ” of Elsa Albonico

• 1997, session artist for the CD " Mahnee Pooleeta " for the “Swingsuite Quintet”, guest Clark Terry for the Old Magic Music - Rome