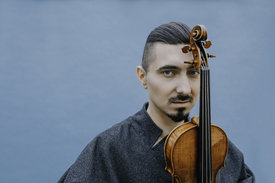 Cover art by Martin Assig, used with the kind permission of the artist

Chance remarks can have far-reaching consequences. When Adam Bałdych was in the early stages of working on the compositions for this new album, among the first feedback he received from a friend was the phrase “you are a poet of the violin.” That remark didn’t just give him the title of the album. It also set him thinking about the effect that music has on him and that, by extension, it can hopefully have on other people...

Bałdych, described by Jazzwise’s Stuart Nicholson as “probably the greatest violinist in jazz today,” explains that impulse quite simply: "I want to communicate." He has a strong desire, as he explains, to “create music which will come into people’s lives and stay with them.” Such beliefs have been reinforced and seemingly made more urgent by the detachment of the pandemic. He started asking himself the question: “What is there in my life story that I can share?” And that in turn led him to search for other lyrical and poetic voices, kindred spirits to place alongside his own. Thus we find one of the great lyrical voices of European jazz, Sardinian trumpeter Paolo Fresu, of whom Bałdych says: “This soul connection is the basic and most important thing, which can then be expressed in the music.” Fresu is on five tunes, most notably on the title track “Poetry”, a true gem at the heart of this programme.

We also hear a saxophonist with whom Baldych feels a particularly strong affinity, Marek Konarski. Both musicians grew up in the same town, Gorzów, roughly ten years apart.Their paths diverged in the years Konarski made his home in Denmark, where he is still involved in several projects. Bałdych says: “He is younger than me, but we have so much in common I sometimes feel we must have known each other in a past life.” That sense that this group is producing music which is rooted in a past reality is there right from the opening track, “I Remember”.

The decision to place his own solo voice alongside others in “Poetry” marks a further step in Baldych’s musical journey, away from virtuosity towards the kind of authentic individual expression that feels most natural to him. “I stopped trying to be a virtuoso producing huge numbers of notes. I want to tell a story, and to shape and balance simplicity with the innovative language of the violin.

He has also - literally - deepened his musical voice, through the use of the renaissance violin, tuned a seventh below the normal violin. That sonorous voice has become more confident, and is to be heard at its most yearning and soulful on the deeply touching short tune "Grace".

“Poetry” is also a landmark album for Bałdych in another sense. It is about to be ten years since his appearance at a late night show at the Quasimodo club as part of JazzFest Berlin in 2011. That performance, which also included pianist Krzysztof Dys, now part of Bałdych’s regular band, led to Siggi Loch signing the violinist the very next day to the ACT label, This is the Pole's sixth album for the label.

There have been other changes in Bałdych’s life in the past year. The album is dedicated to the violinist’s wife Karina, and to his young son Teodor who was born in 2020. Time not spent on the road has clearly had its compensations, and when Baldych talks, his deeply positive spirit shines through: “Troubles give the opportunity to do things you wouldn’t normally do. I have an improviser’s soul.”

Adam Bałdych also feels a very strong connection to the regular quartet he has worked with for the past three years. Krzysztof Dys on piano, Michał Barański on bass, Dawid Fortuna on drums and Bałdychhimself worked successfully together on “Sacrum Profanum”. Over the past three years the trust and the teamwork have deepened, and the way they dovetail together on “Poetry” shows that they are a working band in the truest sense of that phrase. “We really explore together, we work on the music like a string quartet does,” he says. And the listener can hear in tracks such as “I Remember” and “Open Sky” with their folk music energy, just how eager this band is to stretch out on these tunes in the live context. And audiences are responding too: the quartet scooped up the audience prize at the July 2021 BMW Jazz Welt Competition.

Adam Bałdych has marked the tenth anniversary of his arrival at ACT with an important album. “Poetry” is not just instantly appealing, it also has depth, honesty and soul.