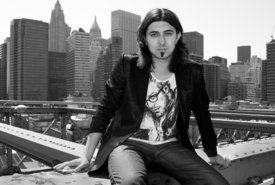 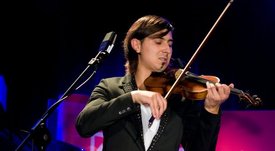 After a much celebrated appearance by Adam Bałdych at the 2011 Berlin Jazzfest, critic Ulrich Olshausen raved in the Frankfurter Allgemeine Zeitung newspaper: "He has, without doubt, the greatest technique of any jazz violinist alive today. We can expect everything of him". High praise for a musician of just 26 years of age, and at the same time only fitting for a man who has been considered a prodigy in his native Poland for many years already. He discovered the violin at the age of 11, and jazz at 13; the music gave him the freedom of expression he was looking for, and at 16 he started his international career. After completing his jazz studies at the Katowice Academy with distinction, he was awarded a scholarship to Berklee College of Music in Boston. Since then, New York has served as his home base for his musical journey around the world. Bałdych has toured with greats such as Grammy winner Jim Beard, and his schedule has been getting fuller and fuller over the last three years. With his exclusively Polish band "Damage Control" he has been wowing the world's jazz clubs and has produced some remarkable albums, including a duet with vocalist Mika Urbaniak, a collaboration with the "Groove Razors", and not least of all "Magical Theatre", inspired by Hermann Hesse.

On "Imaginary Room" Bałdych is now taking on new challenges and has gathered a top-class studio band around him: the Baltic Gang, with the world-class Swedish bassist Lars Danielsson, the Danish drummer Morten Lund (who normally performs his magic with Paolo Fresu and Stefano Bollani), and the Swedish pianist Jacob Karlzon (best known for his collaboration with Viktoria Tolstoy), forming the musical backbone. Two of the biggest talents on the Scandinavian jazz scene - the Finnish trumpeter Verneri Pohjola and the Norwegian saxophonist Marius Neset make up the brass section.

On "Imaginary Room" this all-star ensemble dedicates itself to Bałdych's latest compositions, which leave ample room for improvisation, breath-taking solos and the inspirations of his ingenious accompanists, despite all being based on a compelling melody. These run the gamut from an eastern European touch to elegiac Nordic, right through to the modern American sound of the big city.

What doesn't change throughout is a violin the likes of which you will seldom have heard before. There is no lamenting or sobbing here; indeed, Bałdych's technically stunning lines are more reminiscent of a wind instrument, and the polyphonic passages of a pianist's chords, with a throaty, bluesy undertone throughout.

On "Imaginary Room" one forgets every violin stereotype and gains an impression of Bałdych's unique virtuosity, expressiveness and variability.

I love music for the opportunity it gives me to reach deep into myself. The Year 2011 I have spent in New York and this time has been full of inspirations for me to reveal my musical identity. New compositions for the album were written within only a few days, but they merged all emotions and concepts that had been growing in me for some time. It was like an explosion! I was writing compositions one by one, what in whole pieced together in a very interesting story. I decided to record my new album with a totally new band, with musicians who I highly admire for their sound. That is what happened. Jacob, Lars, Verneri, Marius and Morten are great artists. They gave an incredible message to my music. This recording session was a wonderful adventure. You could feel the magic in the air. It was a very creative and exciting time. Thank you all for this meeting!
Enjoy listening, Adam Bałdych