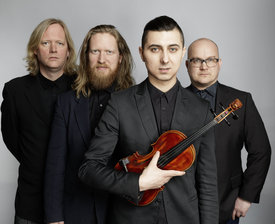 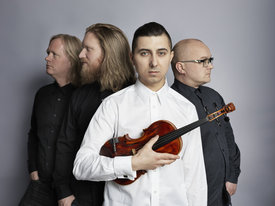 The virtuosity of Polish violinist Adam Bałdych enables him to pass with astonishing ease through all kinds of borders: the boundaries of his instrument, the barriers between genres, the seams between composing and improvising. These dividing lines fall away as his playing coalesces with that of his fellow musicians. These attributes have led the UK magazine Jazzwise to call him “a refreshingly different European jazz star”. As a player who is “a virtuoso and capable of delivering high emotion” (Fono Forum) with his "dervish-like intensity" (Jazz thing), he uses the tradition as the point of departure for new and exploratory journeys up and away beyond jazz.


Bałdych was born in 1986. His talent was spotted early, and earned him the designation of 'Wunderkind'. After an extended stay in the US, where he pursued studies at the renowned Berklee College in Boston, and then in New York, it did not take long for his international breakthrough to occur. Following a highly acclaimed appearance at the Berlin Jazz Festival in 2011, the German newspaper FAZ declared him to have “doubtless the greatest violin technique in jazz among players alive today.” His debut on the ACT Label in his own name, “Imaginary Room” earned him an ECHO Jazz Award. The follow-up on ACT was “The New Tradition”, a duo with the pianist Yaron Herman. That CD was assessed by the Süddeutsche Zeitung as follows: “people who want to know where the next Debussy, the next Grieg or Stravinsky is coming from would do far better to look around in jazz than in contemporary classical music."


That evaluation rings equally true for Adam Bałdych's new album “Bridges,” where the opening of the first track is enough to demonstrate it clearly. A soft, lyrical melody becomes enriched with tonal colour. At the same time, the listener becomes aware of harmonic voicings that recall not just Slavic but also Scandinavian sounds. That is because, alongside Bałdych's own astonishingly varied range of string sonorities – from gossamer harmonics to a fully weighted tone similar to that of a cello – there is the sound of a pianist capable of a similar degree of variation. On “Bridges” Bałdych has the Norwegian pianist Helge Lien and his trio by his side. “I listened to his last two albums with great interest,” explains Bałdych. “The producer Siggi Loch had given me one of them to start with, and I was impressed by the way this trio makes music together. I had been looking for a piano trio that would play my own compositions in a particular way, that is to say they would make the two musical personalities, mine and the pianist's, coalesce, to make something new from my music.”

Helge Lien proved to be the ideal choice for this. His style has undergone continual development over the course of no fewer than eight albums with the trio. That evolution gives Lien the capacity to place his trust implicitly in bassist Frode Berg, who has been a fellow traveller from the start. Drummer Per Oddar Johansen, who joined a couple of years ago, is very different: his tendency is to liven things up. This trio's way is to create melodic shapes which are accessible and perfectly formed, yet never trite. The group's leanings towards the trio tradition from Esbjörn Svensson up to Brad Mehldau are evident, and yet the way they experiment both with the American heritage and Nordic sound-atmospherics is not just their own, it also reaches back into the lineage of the European late romantic classical music, to Debussy, or even to Chopin.

These are all antecedents, which the trio have in common with Adam Bałdych, who like Lien is a lyrical musician with a strong focus on melody, and who also loves rhythmic and dynamic development. Another significant facet of Bałdych's music is the way folk influences enter as such a strong element in his music. An example that illustrates this point well is “Polesie.” The title is a clever conflation in of the words "Polish" and "Poesie" (poetry), while the music draws on the Eastern Polish folk tradition to which Bałdych was exposed via his grandparents. Over and above this, however, the four musicians have all found themselves totally at one with the overall theme that Bałdych has given to this album: silence. "With the world around all of us getting ever louder," says Bałdych, many people are finding that they become afraid of silence. They think they have to keep on talking just to feel good. Yet the acquisition of knowledge requires silence, and there are many things that can only ever be expressed in a whisper. In my experience, silence can be curative, so I have sought out sounds that emanate from whispering."

As each of the eleven pieces on this album emerges from silence - and almost always returns to it - they cast an almost hypnotic spell. That is what happens in the '100% improvisation' of the title track, in the wildly dynamic "Mosaic, in "Bałdych's poignant "Requiem" for departed friends and role models, in "Missing You," which despite its title is an upbeat swinger, and in “Up,” in which experimental sounds are to the fore, and which takes off several times in surprising directions.

The album concludes with a sensational version of “Teardrop” by the UK trip-hop pioneers Massive Attack. “This piece has had a personal significance for me for many years", says Bałdych. "Its wonderful melody is also perfectly suited to the violin, the instrument gives it a folk-ish undertone. I've played the piece again and again in my head, and so I was determined to have my version of it on the album.” As with the whole album, the bridge Bałdych has built can serve as an inspiration.