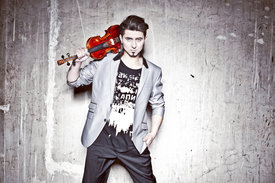 "Without any doubt the greatest living jazz violinist. One can expect everything from him." Ulrich Olshausen from German newspaper „Frankfurter Allgemeinen Zeitung“ about Adam Bałdych’s concert at Jazzfest Berlin 2011. Bałdych was born in Gorzów Wlkp in Poland in 1986.

His outstanding talent was detected early. He was celebrated a prodigy in Poland. “By the age of 9 I decided to visit a school of music” he remembers. He already was well aware of his home country’s music tradition. “Poland has a great music tradition, especially referring to piano music and since Henryk Wieniawski also referring to violin playing.” Only by the age of 11 he decided to start playing the violin with great role models in mind: “I was very much influenced by the famous East-European composers, such as Rachmaninoff, Chopin and Tschaikowski.“ A number of awards for young musicians in classical music proof his talent: In 1999 he became third in Polish national violinist competition in Poznan. The same year he was awarded the first price at regional violinist competition in Szczecin and at Baroque music competition in Gorzow.

By the age of 13 he finally decided to play Jazz. “Jazz offered me the musical freedom, I was searching for.” A noteworthy series of awards followed: In 2002 he won the „Jazz Celebration“ competition in Gorzów. Since 2001 he was annually awarded the „Key for Career Award“ by renowned Polish magazine “Jazz Forum”.

By the age of 16 his international career began. He toured through Europe and Asia. After finishing his jazz degree with merit at Kattowitz conservatory, he got a scholarship at the Berklee College of Music in Boston. Ever since, New York is the place of departure for his musical journey through the world. In recent years he was touring with Grammy-award-winning pianist Jim Beard, other famous violinists like Didier Lockwood, Pierre Blanchard, Jerry Goodman, Krzesimir Debski or Christian Howes and he participated in Jaroslaw Smietana’s project „Tribute to Seifert“. He himself recorded several noteworthy albums in different collaborations –with Singer Mika Urbaniak or the „Groove Razors“. On his album “Magical Theatre“ he also dealt with author Herman Hesse’s famous novel “Der Steppenwolf”. He first gained international attention with his band “Damage Control”.

Besides his regular work for international theatre- and film productions, and even though he partly lives in the US, Bałdych always stays in touch with Polish musicians. It therefore is no wonder that Polish piano star and ACT-artist Leszek Możdżer got to know Bałdych in 2008. Together they wrote the soundtrack to the movie “Sir Arnes Schatz” by Swedish director Mauritz Stiller. Możdżer hereupon introduced Bałdych to ACT head Siggi Loch. Loch did not hesitate to ask Bałdych to join the ACT family.

Together with Loch and Nils Landgren as the producers and a first-class studio band, Bałdych started to record his ACT debut “Imaginary Room” (ACT 9532-2) in March 2012 at Hansa Studios in Berlin. Lars Danielsson, one of the leading bass players in contemporary jazz, drummer Morten Lund and Swedish pianist Jacob Karlzon form the rhythm section. Two of the greatest talents in Scandinavian jazz –trumpet player Verneri Pohjola and Norwegian saxophonist Marius Neset make up the brass section.

On “Imaginary Room” one experiences a kind of violin playing rarely ever heard. Bałdych’s violin technique simply is breath-taking. His slightly raw and bluesy sounds remind one of the sounds of a trumpet player or the chord playing of a pianist. On "Imaginary Room" one forgets every violin stereotype and gains an impression of Bałdych's unique virtuosity, expressiveness and variability. Imaginary Room had its celebrated live premiere at the JazzBaltica festival 2012. Later in 2012 Adam Baldych met pianist Iiro Rantala which would lead to a fruitful, long running collaboration, starting with Adam Baldych’s appearance on Rantala's “My History Of Jazz” album.

„Imaginary Room“ received huge international acclaim at both audiences and the media. For the album, Adam Baldych received the German ECHO Jazz Award 2013 as “best instrumentalist international, various instruments” and Adam Baldych performed live at the award ceremony on May 23rd in Hamburg. Adam Baldych also won the annual reader’s poll of the Polish jazz magazine "Jazz Forum" as "violinist of the year". Also in 2013 Adam Baldych appeared at the Jazz at Berlin Philharmonic series.

On May 30th 2014 ACT released “The New Tradition” – a duo album with Adam Baldych and Israeli pianist Yaron Herman . The UK jazz magazine “Jazzwise” wrote: “Adam Baldych has brought renewed flare and imagination to the art of jazz violin.” and the German national newspaper “Süddeutsche Zeitung” stated: “Anyone searching for a new Debussy, a new Grieg, a new Stravinsky, should now look in Jazz, as in Modern Classic. Adam Baldych and Yaron Herman could have titled their album „The New Classic“. In 50 years their music will be defined this way.“ Moreover, Adam Baldych appeared on the album “Anyone With A Heart” by the Iiro Rantala String Trio and toured extensively with both the duo and the trio. Also in 2014 Adam Baldych trilled the audience as part of the „20 years Nils Landgren & ACT” anniversary concert on October 10th at the Hamburg Laeiszhalle.

Adam Baldych additionally focused on composing for bigger bands. In 2014 he composed a special cycle „Mozaika” for orchestra and jazz quintet – referring to culture mixtures of alluvial population and drawing from their tradition. Also, in 2015 he composed „Mozaika - Impresje” – for improvised violin, vocal, piano, double bass, percussion and string orchestra for Baltic Neopolis Orchestra order. In 2016 as an answer to war in Syria, Bałdych writes „Antiphona - Syrian Psalms” and invites Syrian singer Dima Orscho. Music written for orchestra, voice and improvising instruments based on apocrypha found in Syria, was premiered in NOSPR hall in Katowice, financially supporting people who suffered in war in Syria.

His recent  Album  „Sacrum Profanum“ represents a new beginning for Polish violinist Adam Bałdych – but also a look back into his past. It is not a classical album, and certainly not a new-age album. Bałdych’s esthetic has no boundaries, blends the depth and language of new classical music and yearning to convey personalities through self-expression of jazz.