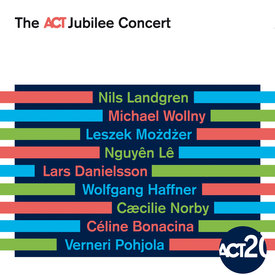 Whoever thought jazz is a marginal branch of music meant for small cellar pubs was disabused at the ACT jubilee concerts during the first week of February 2012. In celebration of the 20th anniversary of the Munich label, jazz visited the impressive concert halls in Germany. Around 4.500 people followed its call and experienced during the four concert nights how the spotlight was turned on jazz. ACT all-star ensemble consisting of nine musicians thrilled the audience at the Philharmonie in Berlin (KMS), Muffathalle in Munich, Tonhalle in Düsseldorf and Laeiszhalle in Hamburg in a performance that according to the German magazine BUNTE was “a world class session with the very best of jazz”. The newspaper DIE WELT was greatly impressed after the final concert in Hamburg on the 5th February and spoke of “a magnificent programme and a storm of applause”. Fortunately, the NDR had decided beforehand to record the concert. Therefore, the ACT family celebration on stage will be available on a double CD which is released on the 27th April for a special price (2 CDs for the price of one).

Siggi Loch’s journey has followed a trajectory all of its own. After stumbling across the music of Sidney Bechet at the age of 15, he formed a band and began dreaming of running his own jazz label. Half a century ago he was among the R&B fans getting a first taste of The Beatles at the Star Club in Hamburg. Soon afterwards he produced some of the first tracks by the pop group The Searchers as he embarked on a career as a talent-spotter, producer and major label executive.

It is, of course, his own jazz company, ACT, which has become his primary passion – along with his ever-expanding collection of contemporary art, examples of which adorn many of the album sleeves. If much of the jazz world now resembles a sterile, hermetically sealed museum, Loch clings to the quixotic notion that the music has to surprise, to stir – and sometimes to shock.

Never shy of speaking his mind, he worries that too many of today’s compositions sound “constructed not composed”. The past is important, but why be enslaved by it? “Musicians have to work their audience,” he told me. “Just like in rock and roll. They’re not living in an ivory tower.” Does that mean a pursuit of the lowest common denominator, Kenny G with a Bavarian accent? Not at all, as ACT’s 20th anniversary tour demonstrated. While there may have been Arctic conditions on the streets outside the venues on the Jubilee Concert tour, musical director Nils Landgren set about creating a piping-hot summation of the label’s history, performed by the members of the ACT Family Band.

Polish pianist Leszek Możdżer indulged in playful duels with his German counterpart Michael Wollny. Pensive French-Vietnamese guitarist Nguyên Lê channelled the spirit of Jimi Hendrix with a little help from Denmark’s Cæcilie Norby. Finnish trumpeter Verneri Pohjola added will o’ the wisp cameos elsewhere, while the diminutive French player Céline Bonacina – almost dwarfed by her baritone sax -- unleashed one fiery solo after another. The musician who remains the symbol of ACT’s act was, of course missing. But Esbjörn Svensson – who died in a scuba-diving accident four years ago – was remembered as the cast gathered for a moving finale. Here’s to the next twenty years