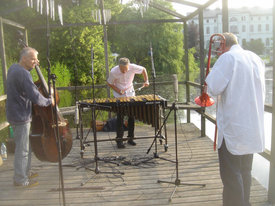 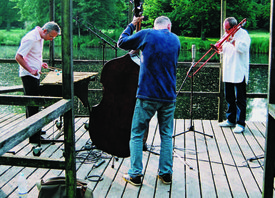 Recorded live and open air at the JazzBaltica Festival at 5:00 a.m. on July 4, 2005 by Cees Snellink
Mastered by Klaus Scheuermann
Produced by Siegfried Loch

What makes the installation "Music on the Water" by Ilya Kabakov & Vladimir Tarasov, situated on the palace pond in Salzau so unique, is the way it captures the essence of music. It was exactly ten years ago, that the two artists created their idea of a visual "field of sound" in Salzau, and the pier in the pond that seems so raw and artless, has held a strange kind of magical attraction ever since. In the book about "Music on the Water", Kabakov himself has said that "notes, sounds create a field of energy, a special ambience." Music is experienced as something that happens in a space. "The notes arrange themselves in this ambience, and each of us wanders through a space on its energy map."

What can the visitor expect? The construction itself seems unfinished; time itself seems to have stopped. A scaffolding has been put up, walls are missing, a stone thrown would find no windows. The distinction between inside and outside has been rendered meaningless. The place provides no cover. Steel wires span the beams that hold no roof, and from them hang various everyday objects such as knives and forks as well as some metal sound rods. The wind breathes through the pier and draws quiet sounds from the objects touching each other.

In all these years I have rarely experienced a summer festival in which this place didn’t attract visitors, enticing them to stay. It has a melancholy atmosphere; it draws us away from "the inevitability of everyday stress" (Thomas Deecke in "Music on the Water").

But not until the festival year 2005 did the JazzBaltica artists discover the installation as a place for their music. The initiative had come from Siggi Loch, who had been a regular visitor to the installation. And he knew about the magical atmosphere of the early morning hours at "Music on the Water". It was exactly at 5 o’clock on the morning of Monday the 4th of July 2005, and after the festival and the session at the palace, that Lars Danielsson, Christopher Dell and Nils Landgren carried their instruments past the tents of the campers and set themselves up, just as the sun was rising. At first only a few guests were present as they sounded the first hesitant, restrained notes – soft like the morning dew. They were accompanied by birdsong, protesting swans on the pond and the sound of the morning wind in the web of knives and forks above the three musicians.

Rarely has music found its way back to its source in this way. It was an extraordinary example of musical silence. Kabakov und Tarasov would have enjoyed this space filled with sound playing a tangible leading role in their installation.

JazzBaltica itself has never ended more aptly than on this early morning in the Salzau palace gardens.