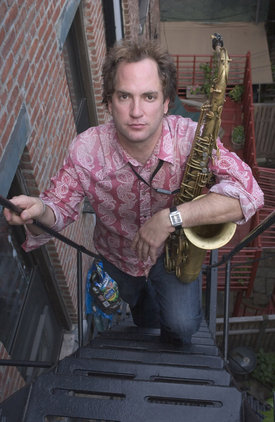 Born in Berkeley, California in 1960, Peter Apfelbaum started playing drums at the age of 3, taking up piano and saxophone in elementary school and forming his first band at age 11.  A product of the Berkeley Schools' pioneering Jazz Project, Apfelbaum began performing professionally while in his early teens and was a member of the award-winning Berkeley High Jazz Ensemble under the direction of Phil Hardymon. In 1977 - his senior year at Berkeley High - he formed the 17-piece Hieroglyphics Ensemble as a vehicle for composing and exploring non-traditional musical forms. The Ensemble was initially largely comprised of fellow BHS classmates, some of whom would later move to New York and achieve recognition in their own right. The band originally included pianist Benny Green, saxophonist Craig Handy and trumpeter Steven Bernstein and would later feature saxophonist Joshua Redman prior to his move to NY. The band released their self-produced debut album, "Pillars", in 1979 and began to attract international attention for their unique mix of elements of world music with the aesthetic of the jazz avant-garde. Around this time Apfelbaum made his first sojourn to New York, where he worked with Carla Bley, David Amram and the late Eddie Jefferson. He toured Europe for the first time in the fall of 1979 with Karl Berger's Woodstock Workshop Orchestra, an all-star band which included Lee Konitz, Oliver Lake, Don Cherry, Leroy Jenkins and Trilok Gurtu.

In 1981 Apfelbaum returned to the Bay Area and resumed rehearsing regularly with the Hieroglyphics Ensemble. In the mid-80's he toured the U.S. with O.J. Ekemode and the Nigerian All-Stars (first on baritone saxophone, later on drums) and also worked regularly with Cuban percussionist Francisco Aguabella's band, as well as with local reggae and r&b bands. By 1988, the Hieroglyphics' performances had become more frequent, and in the fall of that year Apfelbaum was commissioned by the San Francisco Jazz Festival to write a suite for the band. The resulting "Notes From The Rosetta Stone" was premiered at the Palace Of Fine Arts and featured the legendary trumpeter Don Cherry as guest soloist. Cherry was so impressed with the band that he took up residence in San Francisco and adopted Apfelbaum and fellow Hieroglyphs Bo Freeman (bass) and Josh Jones (drums) as his "Multikulti" group, touring extensively in North America, Europe and Japan over the next several years. Cherry also continued to appear frequently as a guest with the Hieroglyphics, and featured the band (as well as two Apfelbaum compositions) on his album "Multikulti" (A&M, 1989).

The early 1990's was a particularly fruitful time for Apfelbaum and the Hieroglyphics Ensemble. The Grateful Dead championed the band, inviting them to open several of their shows during this period, and Apfelbaum received the Dead's annual Rex Foundation Award for Creative Excellence in 1991. The band secured a record deal with Antilles/Island and released "Signs Of Life" in 1990 (which received a Grammy nomination for the composition "Candles and Stones") and "Jodoji Brightness" in 1992. The band travelled to Germany, appearing at the Leverkusen and Berlin festivals, and won the 1992 Down Beat Critics Poll award for Big Band, Talent Deserving Wider Recognition.

Apfelbaum put the 17-piece group on hold during the mid-90's, forming a sextet comprising Hieroglyphics musicians and acoustic bassist John Shifflett. The group recorded "Luminous Charms" (Gramavision/Ryko) in 1996 and became Apfelbaum's working unit for the next few years. He also toured with Jai Uttal's Pagan Love Orchestra and Ann Dyer's No Good Time Fairies during this period.

In 1998 Apfelbaum moved to Brooklyn, NY, where he soon formed a NY version of his Sextet, featuring Josh Roseman (trombone), Charles Burnham (violin), David Phelps (guitar), Patrice Blanchard (bass) and Dafnis Prieto (drums). He also began touring as a duo with electronics pioneer/inventor Don Buchla, appearing at festivals in Italy, France, Iceland and Mexico in 1998-99. In the summer of 1999 Apfelbaum returned to the Bay Area to reconvene the Hieroglyphics to perform "Yihat", a piece written for the group by Muhal Richard Abrams, at Stanford University.

Apfelbaum toured Europe with several NY-based groups over the next few years: Joe Bowie's Defunkt Big Band (1999), Steven Bernstein's Millenial Territory Orchestra (2000), Kamikaze Ground Crew (2000), and the Groove Collective (2001). In the spring of 2002 he joined Phish frontman Trey Anastasio's band, with whom he would play four sold-out U.S. tours, appearing on the David Letterman Show and the Tonight Show, among others. Apfelbaum also began appearing with Brazilian percussionist Cyro Baptista's Beat The Donkey (with whom he travelled to Morocco in 2004) and was hired by the legendary singer/activist Harry Belafonte to arrange and compose music for his 2003 European tour.

In February of 2003 Apfelbaum formed the 11-piece New York Hieroglyphics, adding to the personnel of his New York Sextet a second guitarist, Viva De Concini, and four original Hieroglyphics members who had moved east: Peck Allmond (trumpet, reeds), Tony Jones (tenor sax), Jessica Jones (alto and tenor sax) and Norbert Stachel (baritone and bass sax, flute). The band played two sold-out nights at NYC's Jazz Gallery, and other local gigs followed. Apfelbaum had recommitted himself to the idea of having a large group of like-minded musicians to write for and perform with, and in the fall of 2004 the band went into the studio to record a new CD of Apfelbaum compositions. The resulting CD, "It Is Written", will be released on ACT Music in the Fall of 2005.