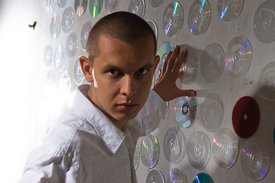 Paweł Kaczmarczyk is “more than a promise”, wrote the major Polish newspaper Gazeta Wyborcza, and without any doubt he is one of Poland's pre-eminent jazz pianists from the younger generation. With his debut release as an ACT recording artist, Complexity In Simplicity (ACT 9484-2), the 25 year old pianist now jumps onto the international stage: With his Audiofeeling Band he narrates a set of terrific multi-level modern jazz episodes filled with the youthful spirit of adventure. Playful sound textures and power playing, extroverted up-tempo jazz and introverted ballads, deep-rooted swing, hard bop and avant-garde fantasies, horn passages, and above all piano playing in an experimental field that ranges between Bill Evans, Esbjörn Svensson and Brad Mehldau – Paweł Kaczmarczyk’s eclectic and kaleidoscopic music is multi-dimensional.
Paweł Kaczmarczyk graduated in Jazz Studies at the Karol Szymanowki Academy of Music in Katowice. In 2001 he established the KBD trio with Michał Baranski on bass, and Paweł Dobrowolski on drums. Their music is full of warmth and sensitivity, but with no lack of electrifying dynamics and avant-garde ideas. The group draws its inspiration from the work of artists like Herbie Hancock and Bill Evans. The concepts of Brad Mehldau and Wayne Shorter form part of their musical vocabulary as well. The trio won first place at the 26th "Jazz Juniors" International Competition for Young and Debuting Jazz Groups (2002), took the "Grand Prix" at the 40th "Jazz on the Oder" Jazz Festival in Wrocław (2002), and was awarded the "Key to a Career" prize at the "Pomeranian Jazz Autumn" festival.
Ever since his Live album with the KBD trio was chosen as the “Album of the Year” in the 2005 by Polish Public Television Channel 2 Awards, Pawel Kaczmarczyk has been considered as a major force in Polish jazz music. In the same year he won the MELOMANI jazz society’s major prize, Poland’s so-called “Jazz Oscar”. Since then the readers of Poland’s prestigious Jazz Forum magazine have regularly voted him “most promising” musician in the publication’s yearly poll, and in 2007, the magazine named Audiofeeling, Kaczmarczyk’s first album as leader, “Album of the Year”.
Pawel Kaczmarczyk has performed at a large number jazz festivals all over the world, including, among others, Leverkusener Jazztage (Germany), Jazz Meeting Berlin (Germany), Palatia Jazz Festival (Germany), 12 points! European's New Jazz (Ireland), Gulf Jazz Nights (United Arab Emirates), 12. International Festival of Jazz Piano (Czech Republic), Warsaw Summer Jazz Days (Poland), Jazz en Nord (France), and the Jazzy Colours Festival (France). The pianist has worked with a wide range of musicians, including Janusz Muniak, Adam Pierończyk, Monty Waters, Kazimierz Jonkisz, and many others.