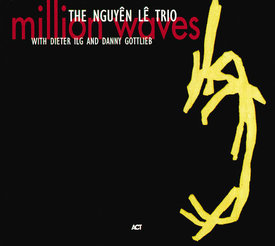 Recorded and mixed by Walter Quintus at CMP-Studio, Zerkall, Germany in December 1994, except #2 recorded by WDR
on April 26, 1994
Produced by Siegfried Loch

Vietnamese guitarist Nguyên Le is one of the major players on the world jazz scene. Born in 1959 in Paris, Lê is a self-taught musician who began playing drums at 15, and went on to master the guitar and electric bass. By the end of the ‘80’s, Nguyên Lê was orking in France with the likes of Carla Bley, Randy Brecker, Gil Evans and Quincy Jones.

In April 1994 guitarist Lê, bassist Dieter Ilg, and drummer Danny Gottlieb participated in trombonist Bobby Brookmeyer’s production, "Electricity" (ACT 9219-2), at the WDR studios in Cologne, Germany. Afterwards the three got into a spontaneous jam session in the studio. On hearing the music, ACT producer Siegfried Loch decided that evening to record the group. "Million waves" is the satisfying result. The dazzling 21 minute session is presented on the CD under the title "Trilogy". Producer Loch pointed out it could just as well have been titled "Birth of a Trio", since the session, recorded almost by chance, was the origin of this record. The statuesque "Mille Vagues" was inspired by ancient traditional Korean court music. Like a bird on a tortoise’s back, the aerial melodies balance on the massive hieratic drums. "Million Waves", like the million events which fashioned us; like the million traces we leave on the way.

Bassist Dieter Ilg is one of the most sought after creative bassist in Europe. His working credits include Michael Brecker, Al di Meola, Peter Erskine, Charlie Mariano, and Steve Khan. Trumpeter Randy Brecker commented: "Dieter challenges everybody to dive into the unknown, and then guides you back into the form of the original composition."

Drummer danny Gottlieb is one of the most versatile drummers on the contemporary jazz scene. On the one side an amazingly powerful rock-jazz fusion drummer, Gottlieb’s other side portrays a seldom-found lightness, suppleness, and subtlety. He has worked with such diverse stars as Pat Metheny, Airto, Gary Burton, Stan Getz, John McLaughlin, Gil Evans, and Sting.